By Alex Porter
6 September 2017
In our latest poll tracker, we look at three countries where progressives face varying fortunes
Share

With President Emmanuel Macron’s personal standing in the polls taking a sharp decline over the summer, the French senatorial elections scheduled for September 24 are symbolically significant for the reputation of his new party, La République en Marche (LRM), as well as potentially playing an important role in bolstering the president’s legislative capabilities in the second chamber.

A poll published by Ifop for Le Journal du Dimanche on August 27 showed public dissatisfaction with Macron’s performance so far at 57 per cent, up from 43 per cent in July – the worst numbers for any French president at this point in their term in over 20 years.

Of the 348 seats in France’s second chamber, 170 are up for election this month, including the metropolitan departments of Indre-et-Loire in the Pyrénées-Orientales, the eight departments of Ile-de-France, several overseas constituencies and six of the 12 seats representing French citizens living outside the country.

But unlike MPs, French senators are chosen by an electoral college that is largely composed of local councillors. Given the largest section of this electorate belong to the rightwing party, Les Républicains (LR), LRM is unlikely to see a repeat of its sweeping victory in June’s national assembly elections.

New polling by the newspaper Le Monde and l’Observatoire de la Vie Politique et Parlementaire (the Observatory of Political and Parliamentary Life – OVPP) predicts a strong surge for LRM, which are expected to win 64-69 seats, in addition to the 10 they already hold that are not up for re-election. This would place LRM as the second largest party behind LR, who are expected to lose 9-14 seats, maintaining a group of 128-133 in the senate. The Socialist party (PS), meanwhile, is predicted to lose around a third of its seats, reducing its group to between 58 and 63 members.

Macron’s party will therefore need to forge alliances in the senate to pursue his legislative agenda. The president should be able to count on the support of the Union Centriste (UC) group, who are projected to hold their 43 seats, but it will need to look to other parties too in order to form a majority in the upper house.

Portugal’s ruling Socialist party (PS) has navigated a summer of potentially destabilising events rather more smoothly. Prime minister António Costa faced criticism from the opposition following a surge of deadly forest fires in June – coming just one day after the country had finally been relieved of almost a decade of EU-imposed austerity measures it might have presaged political difficulties. Similarly a break in to a military base near the capital of Lisbon could have proved a serious political embarrassment.

However, despite these potentially tricky few months, polling by Eurosondagem SA for Expresso in August showed the party’s popularity holding strong ahead of the fast approaching local elections on 1 October. The prime minister remains by far the country’s most popular party leader, enjoying an approval rating of 48.9 per cent, while his party polls at 40.8 per cent compared to the opposition centre-right Social Democratic party (PSD) at 28.1 pr cent.

Of course, national leadership always matters in local elections and the results will be read as a barometer of country-wide support for Portugal’s main parties and their leaders, but local issues and personalities often dominate the races.

The Lisbon mayoral race is of particular significance to the PS, as Costa held the post before taking up the premiership and it is often a springboard to senior national office. Thankfully for the Socialists his successor, Fernando Medina, is up against a PSD challenge that, so far, is not going well for the opposition. The PSD candidate Teresa Leal Coelho, had a gaffe-filled start to her campaign, and is widely perceived, even by members of her own party, to have performed poorly in the first debate last week.

The centre left in Austria, meanwhile, faces a rising star on the right and a very tough challenge in October’s legislative election. Since the youthful foreign minister Sebastian Kurz (pictured) assumed the party leadership the conservative Austrian People’s Party (ÖVP) has seen a surge in the polls, with latest figures from Research Affairs/Österreich giving the party a 34 per cent share of the vote. This would put the centre-left Social Democratic party (SPÖ) in third place on just 22 per cent, trailing behind the far-right Freedom party (FPÖ), who currently stand at 24 per cent.

Such a result could place the anti-immigrant FPÖ in the position of kingmaker, with the ÖVP the obvious candidate for partnership. This week, Kurz, has pushed his own party’s position on immigration further to the right, by proposing cuts to migrant benefits.

Kurz has managed a dramatic turnaround for his party since taking the leadership, with the party polling below 20 per cent several times in the spring. Despite serving as foreign minister for the last four years, the young leader has managed to brand himself as somewhat of a political outsider. Were his pitch to be successful, the 31 year old would become the country’s youngest ever chancellor.

His rise has left the SPÖ in a very difficult position. Last year it received its own leadership bounce when a ‘bloodless coup’ saw the more energetic and popular Christian Kern succeeded Werner Faymann as head of the party and chancellor. Initially Kern’s more vigorous approach – exemplified by his detailed ‘Plan A for Austria’ blueprint – saw the SPÖ regain the initiative in the polls. Now the sheer popularity of the young conservative leader Kurz has made it a daunting task for the social democrats to close the gap before October’s vote. 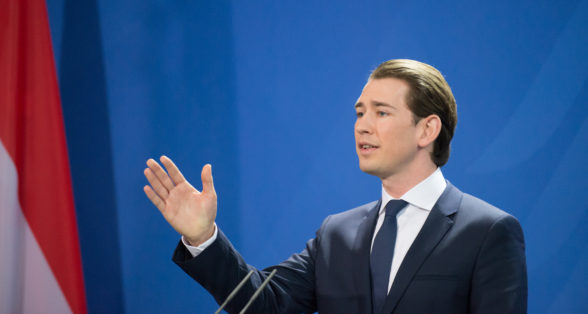